The last word about painting will probably not be spoken in the foreseeable future, though painting has been declared dead almost every decade since the 1960s.

It is not that the discipline is so phoenix-like that it heroically resurrects once per ten years.

Neither does it renew itself revolutionarily.

It just flows with the waves and the winds.

It is a very opportunistic discipline, especially because it is both witnessing and imagining, and technically it is very versatile.

Although some painting-lovers seem to prefer to live in the past, as even some painters themselves seem to, painting – like most other basic art disciplines – is actually something very much of the present.

Circumstances and situations are decisive for how painting looks like, as paint itself can be used almost seismographically.

This week i visited painter Ton Kraayeveld (1955) in his studio in Dordrecht.

He told me about decisive events in his life for his paintings.

For instance a residency in Bulawayo, Zimbabwe, two decades ago, fostered more social awareness in his work.

At such a moment different things seem to come together, like – in this case – the light and colours, the influence of Modernism on colonialism and its aftermath etc.

Another decisive moment was the almost stubborn appreciation of a gallerist for a work made up of short words, which Kraayeveld himself regarded as no more than a playful joke.

It resulted in what has become an important aspect of his oeuvre.

Very short words are the mortar of our languages, they are like short jumps in time and space, both meaningful and meaningless.

What is very much visible in his work at the moment is a visit to China, a few years ago.

Again, different aspects of his trip are visible in his work: its formal language, – again – the use of Modernism, visions of political power, etc.

While outside sunshine and rain alternated in Dordrecht’s narrow streets, we talked about painting and its reasons dictated by life itself, about its past and present, about its technique, about individual and common experiences, and  the hours passed easily, almost too easily….

Contents of all photographs courtesy to Ton Kraayeveld

By the way, Kraayeveld’s work is at the moment online on show at Gallery Viewer: click on the following link:  https://galleryviewer.com/nl/galerie/54/galerie-helder/kunstenaars/715/ton-kraayeveld

The present corona lockdown has made it extremely difficult to show art to the public.

An online presentation cannot compete with the real thing.

It is not possible for the viewer to lose oneself in the proper thing, with its own measures, techniques, shapes, colours etc.

Elizabeth de Vaal of the Post 15 Foundation – which facilitates residencies in the village of Pécsbagota, Hungary – has found a partial solution by inviting people personally and responsibly to see the A Kocsma exhibition, currently at Stichting Ruimtevaart.

Happy to receive her invitation, i visited Ruimtevaart some days ago.

The show with works by some twenty-nine Dutch artists (all former residents) was made on the occasion of the twelve-and-a-half years anniversary (in Dutch that’s called a “copper jubilee”) of the foundation and the Pécsbagota residency near the city of Pécs.

An advantage of a personal invitation was that Elizabeth could tell me everything about the history of the Pécsbagota residency, which is in a tiny village in the south of Hungary.

Quite a few Dutch artists have resided there since 2007.

There are also ties with the University of Pécs, Hungarian artists and art students.

Dutch artists have an opportunity to work in a place far from the madding crowd, in a rather better climate than the Dutch, and in a small village community which is by now used to having these artists hanging around.

It gives a good chance for an artist to see his/her own work and practice in different circumstances and as such to reflect on his/her own qualities, i think.

Here are some pictures of details of what is on show.

Contents of all photographs courtesy to the artists, Stichting Post 15 and Stichting Ruimtevaart, Den Haag 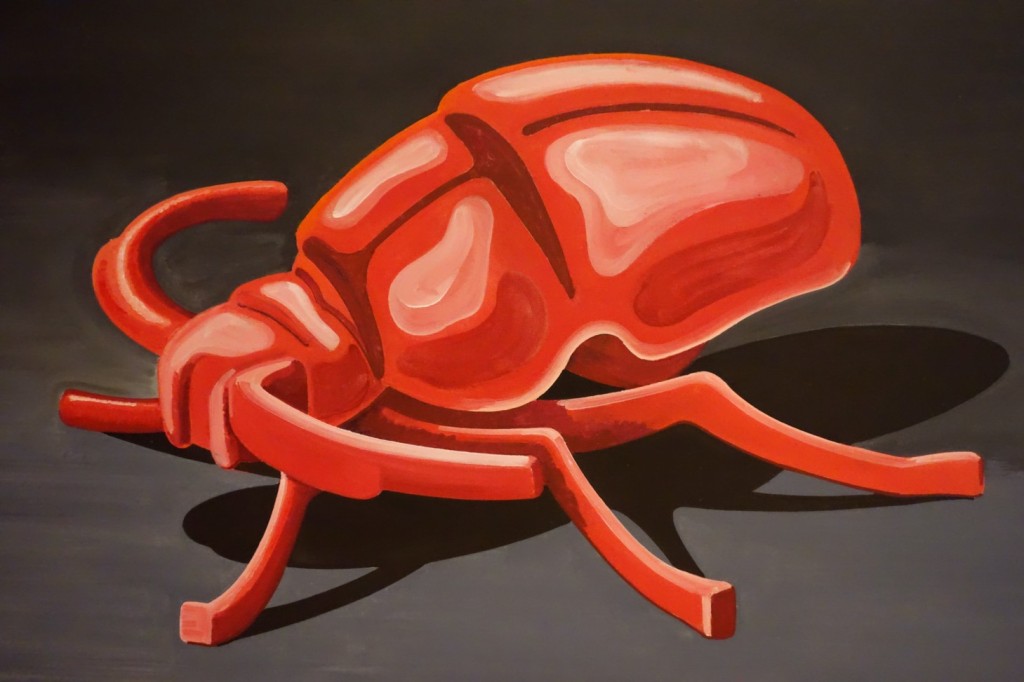 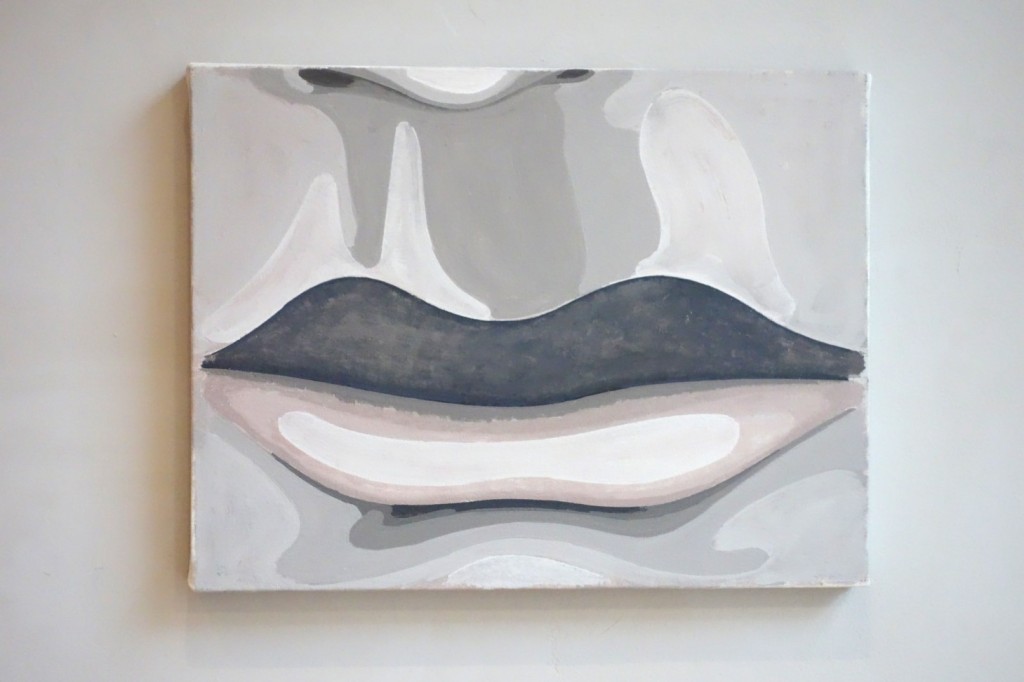 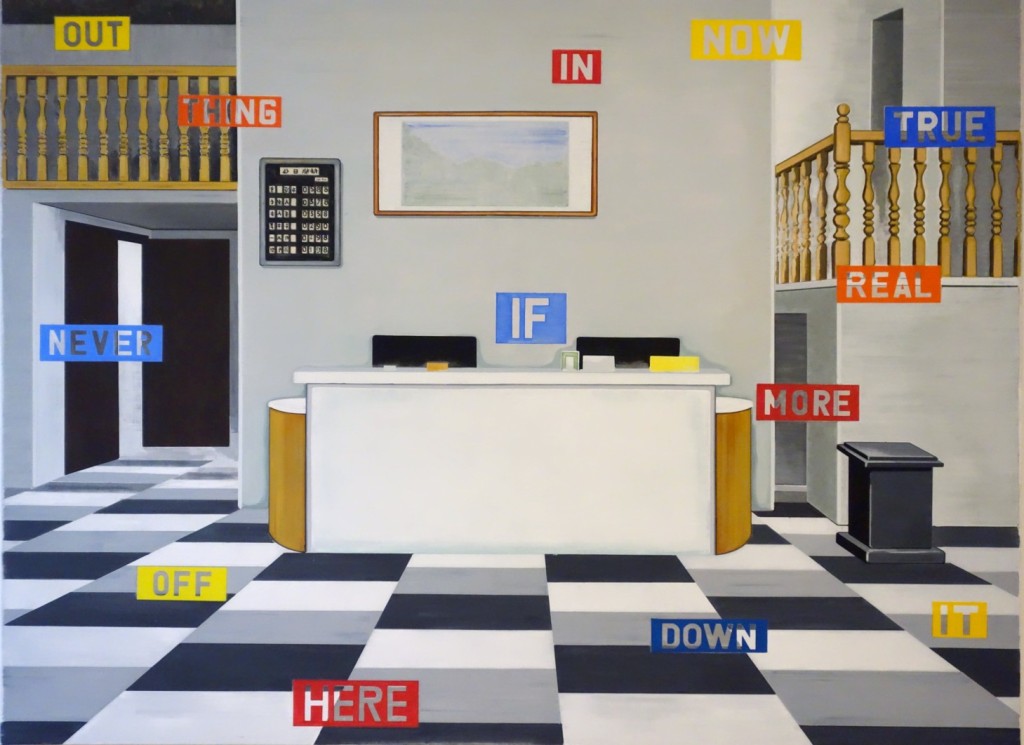 It is not a big exhibition. 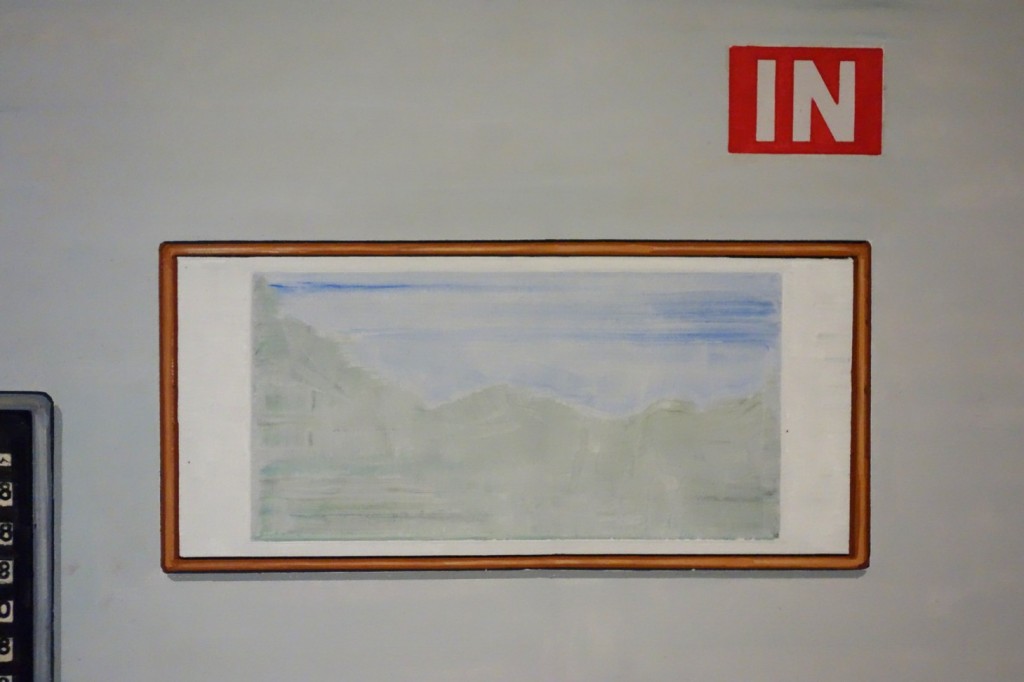 There are four more or less monumental works, a few smaller paintings and some drawings, but their great quality makes well up for their small number. 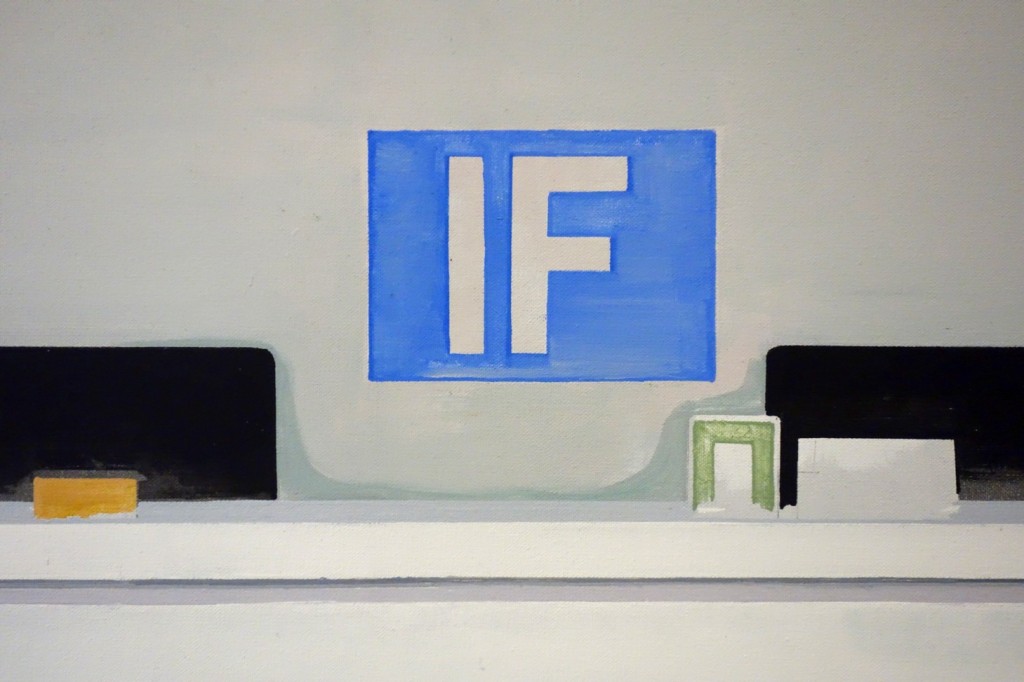 The exhibition seems to be composed around the four bigger works of which each shows a different aspect of Kraayeveld’s art. 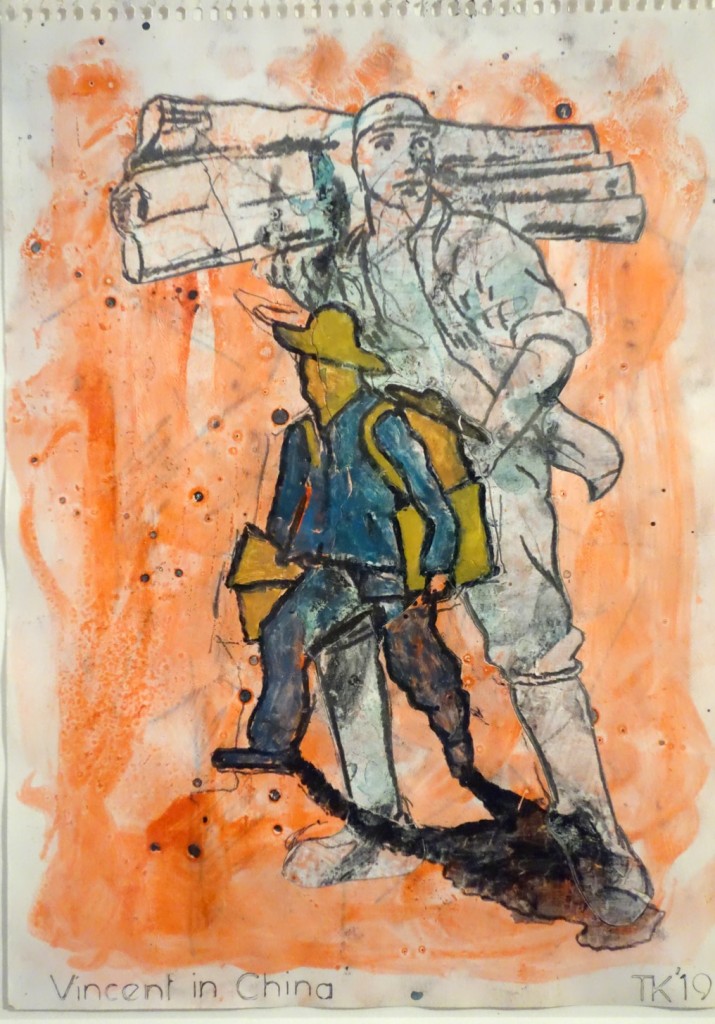 The drawings appear to tell quite a different story. 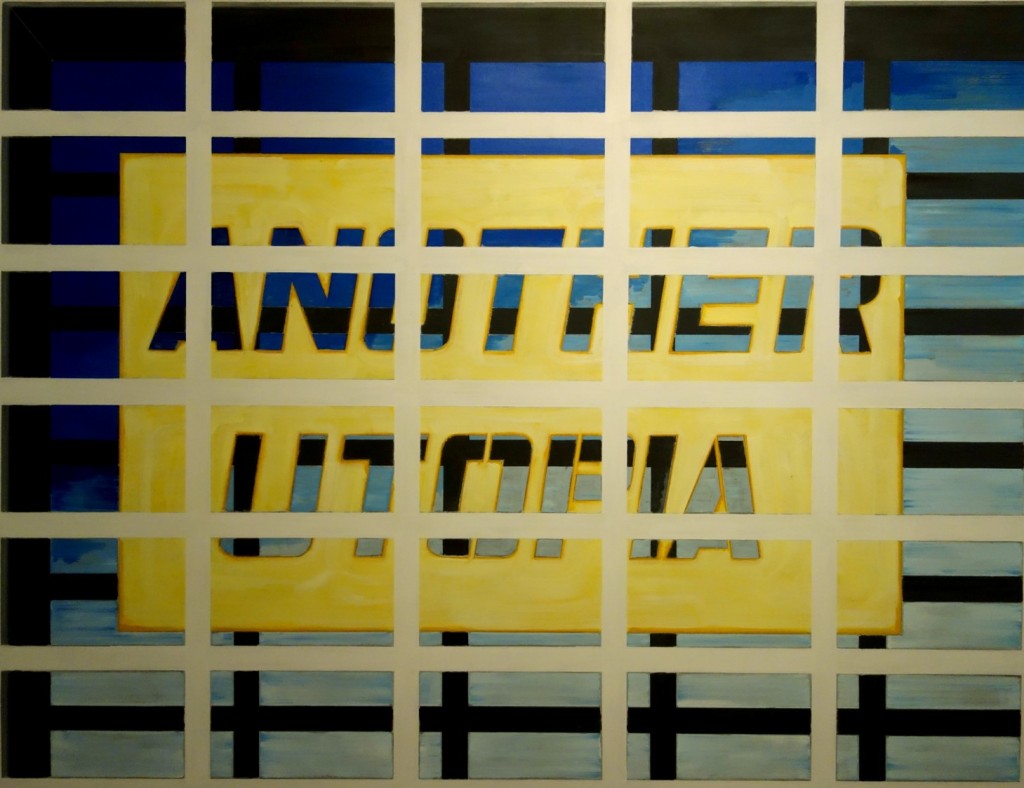 Where the paintings are quite controlled, the drawings have a more expressive outlook. 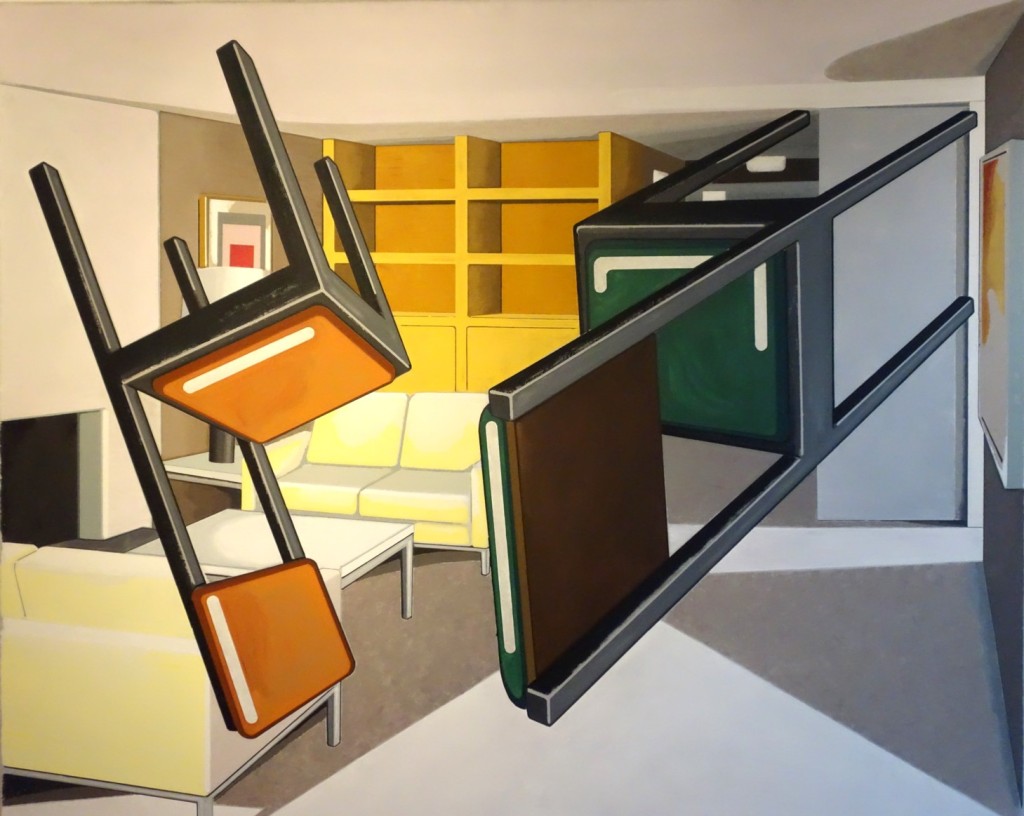 Some of them are re-workings of (much) older drawings. 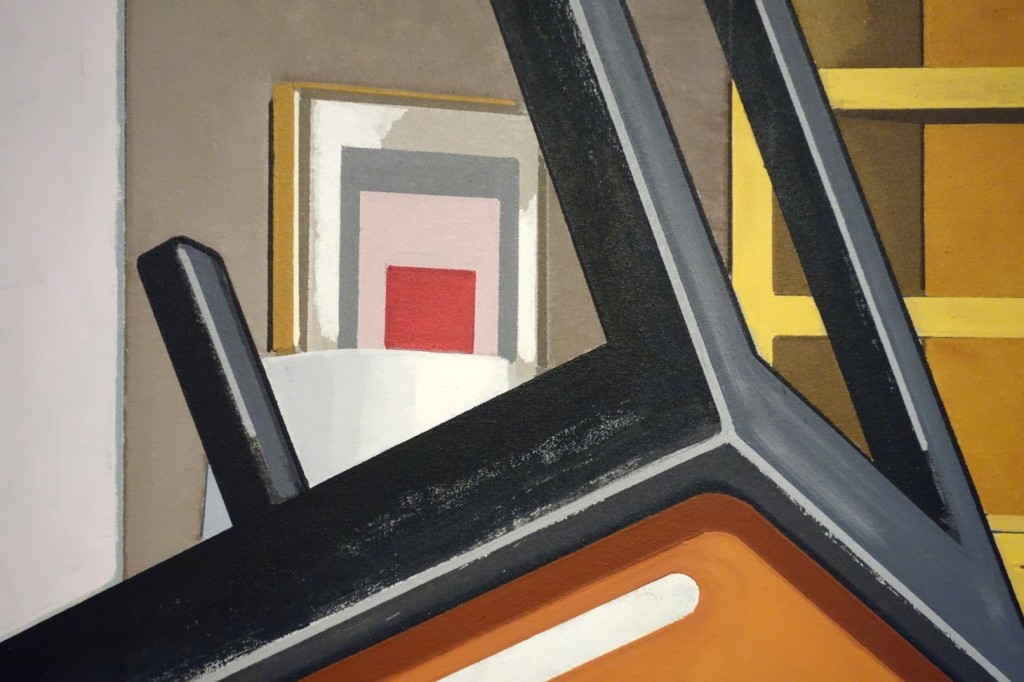 However, when looking at them closely, they show the same idea of constantly balancing between order and chaos, both in their compositions and in their ideas. 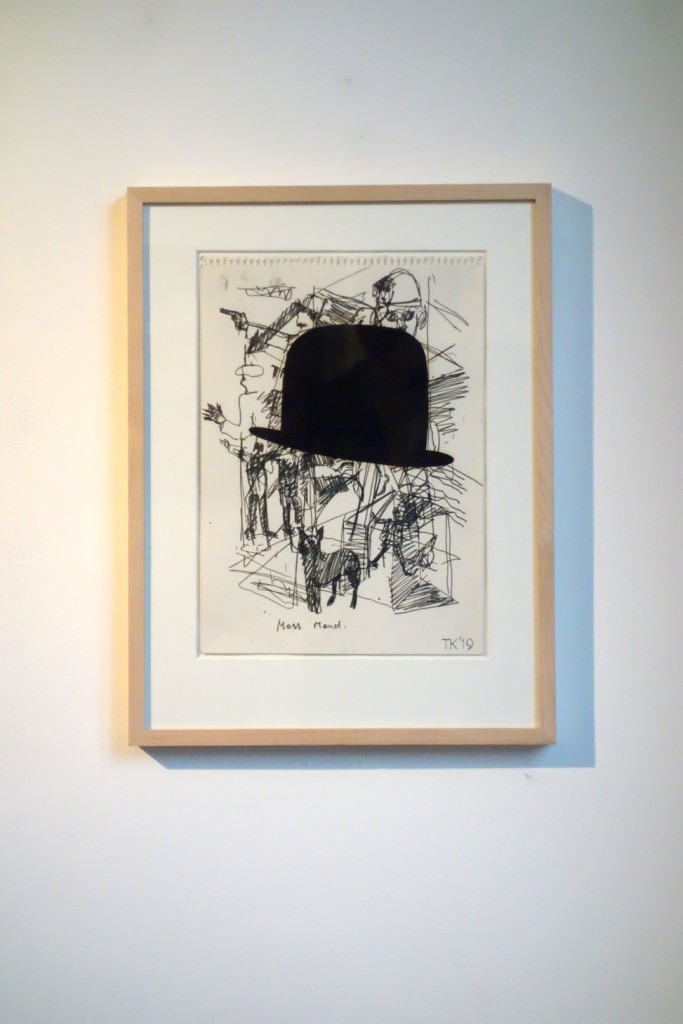 In Kraayeveld’s works there may be artistic and literary connotations of the modern and postmodern world, with sometimes peculiar contradictions. 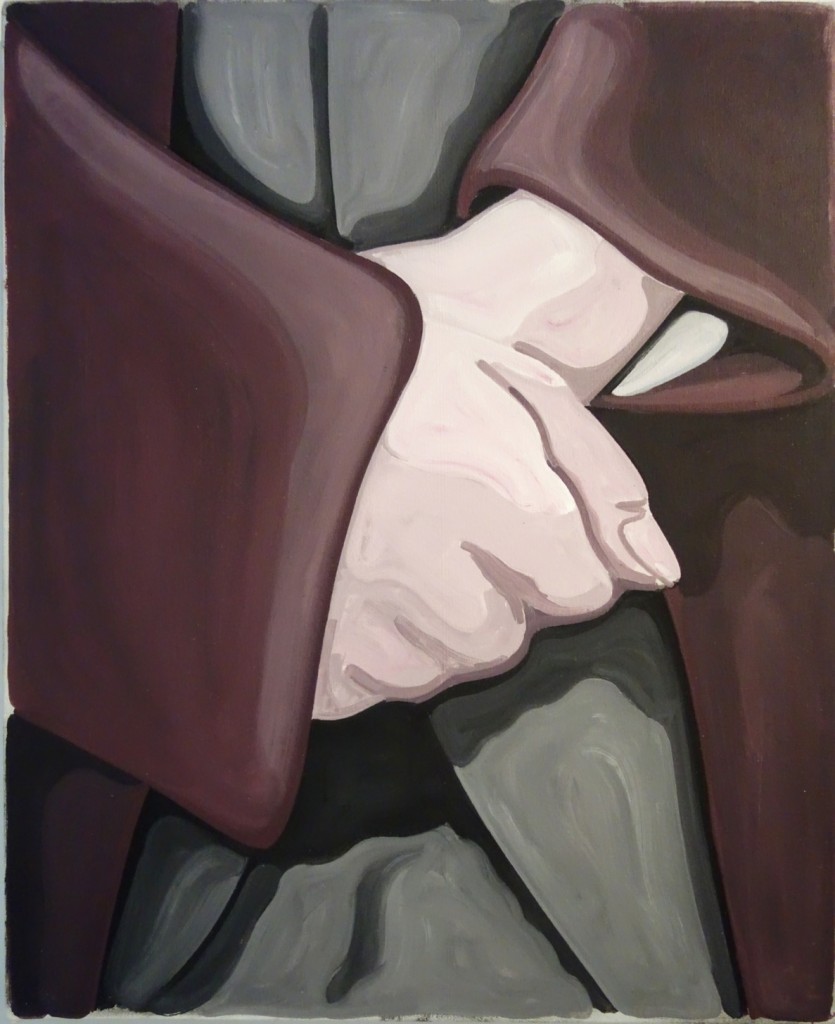 In Kraayeveld’s works these contradictions translate into compositional contradictions, which gives them a slight sense of absurdism. 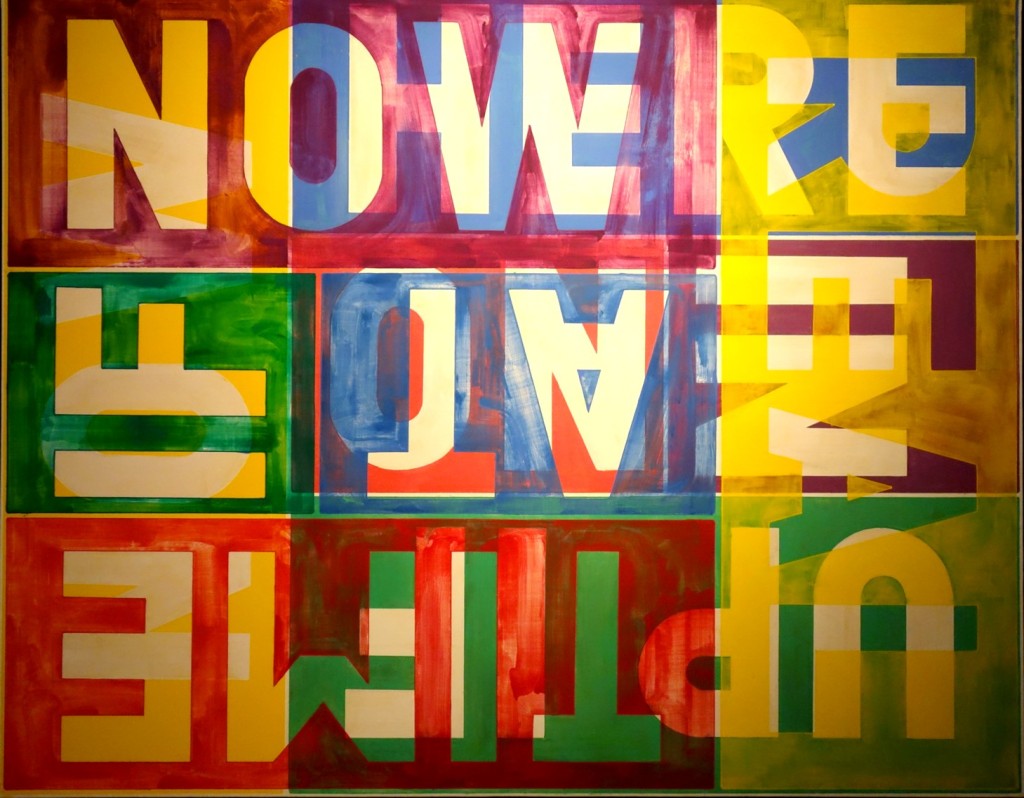 This is a compact showcase of Kraayeveld’s wonderful artistry. 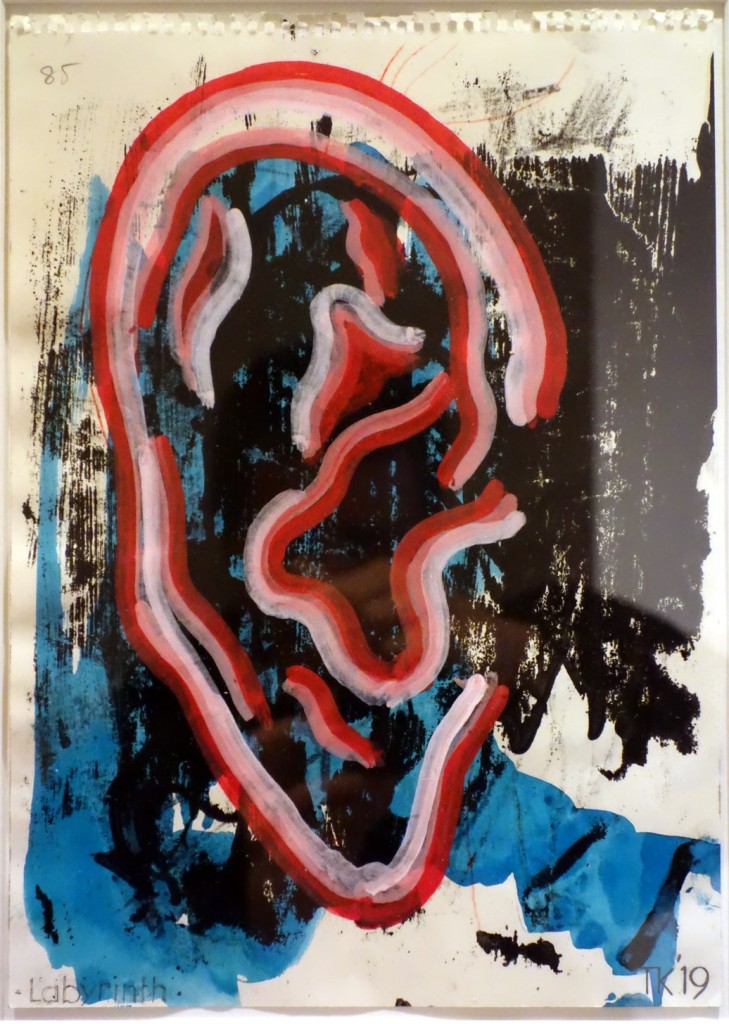 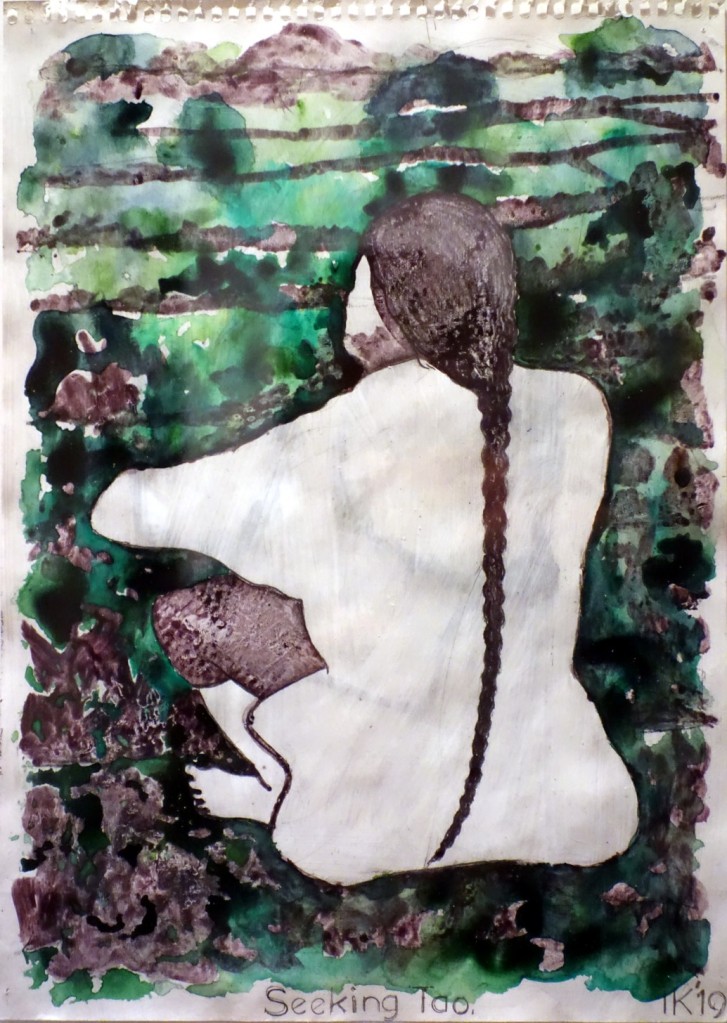 Be sure to go and see it, as this is the last week of the exhibition. 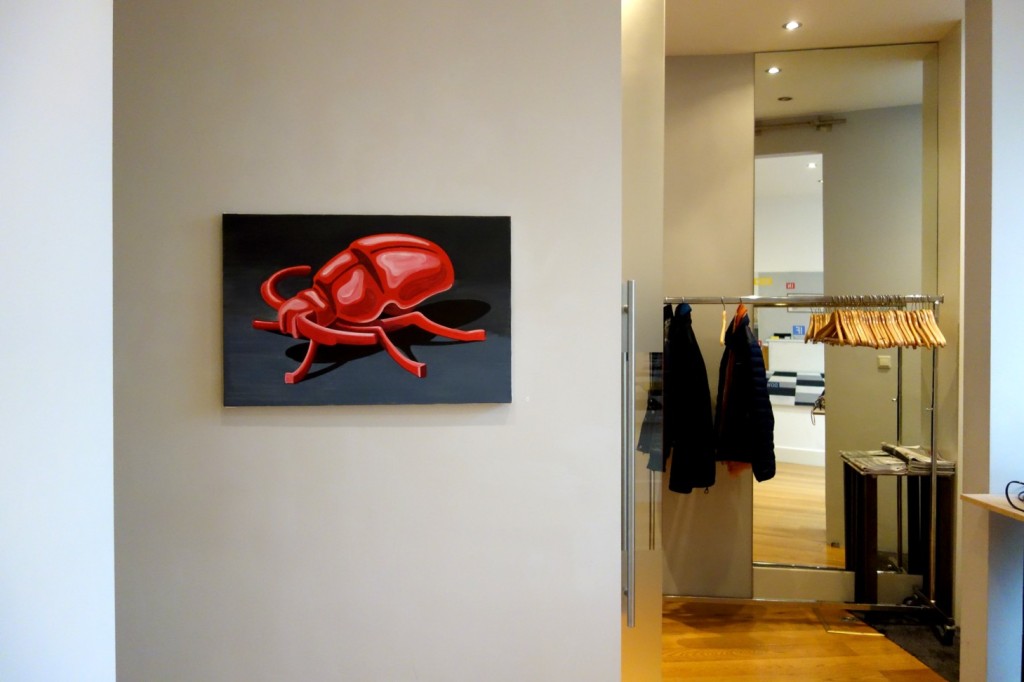 Contents of all photographs courtesy to Ton Kraayeveld and to Galerie Helder, Den Haag.

In spite of the title the works on show are all but anachronistic.

It is difficult to find a common denominator for the show but the combination works very well and makes for an interesting exhibition with very different perspectives.

All five artists have a kind of stubbornness in the way they make their work without showing off with that stubbornness.

They are all masters of their practices.

Rather than anachronistic they seem to hover along time.

Even Kraayeveld’s paintings, which might be called the most historically retrospective in the exhibition, show modernism as a presence and not as a reflection in time.

Contents of all photographs courtesy to all artists and to Galerie Helder, Den Haag