Pim Piët (1954) is an artist who is fully aware of the fact that he lives in a world with other artists, amongst others.

They too shape his artistic framework and he gives in to that with sincere attention.

Moreover, he has been a keen art collector during his artistic career.

Presently at Bos Fine Art he shows a modest retrospective of his own works in combination with examples from his collection of works by others.

In these works by others there is, of course, a great deal of abstraction, but also of conceptualism, and Piët shares an ironic sense of humour with some of them.

The oldest work by Piët in the exhibition is a work from 1977 which hangs as a kind of tribute next to a painting by Tomas Rajlich (1940), his teacher in the 1970s, who had a decisive influence on his ideas about art making.

Since then a lot has happened, and a lot is still happening as his recent works show.

There are influences of music and sound, and of non-western cultures, especially the Japanese.

The exhibition goes with a fine small but comprehensive catalogue showing most of the exhibited works, but if you want to see the real thing you have to be quick. The works are still on show over the weekend.

Contents of all photographs courtesy to Pim Piët, all other artists and Bos Fine Art, Den Haag.

Heden asked eighteen Hague artists to each show a work of their own that hasn’t been exhibited before and that is of special value to them.

It has resulted in a heterogeneous exhibition of eighteen works in the central space of the gallery.

For those, like me, who are familiar with Hague artists, this is a good chance to see both familiarity and surprises.

For those who are not familiar with these artists, this show could be a bit of an introduction, although it is much too small to give a real introduction to the rich diversity of artists who live and work in this town.

As such the title Haagse Heritage (partly English) is a misnomer, except if it is the title of an upcoming series. [Update: Heden just told me this is the second of an ongoing annual series – BP]

Another aspect you might miss is a list with short statements about reasons why the artists have chosen a particular work.

That would have given more meaning to the whole presentation and to the diversity of the works.

Apart from that it is a fine group of works presented in a balanced way.

As photographs always lie, and as i couldn’t make satisfying pictures of three works in the show, it would be better to take a look yourself.

Now that you’ve come here: subscribe to Villa Next Door (top right of the page)!

Contents of all photographs courtesy to all artists Heden, Den Haag.

Well, there you are: i proposed to publish only a few pictures as a teaser for what i think you should really go and see.

But then, when selecting pictures for this post, i was overcome by the same kind of drunkenness you get when seeing this exhibition, and here are far more pictures than i wanted to publish intially.

Source of this drunkenness is Christie van der Haak (1950), or rather her work.

She invited sixteen guest artists to show their works against the backdrop of her own wall decorations at Galerie Maurits van de Laar.

At the opening one of the artists called it a dialogue, which i think is the right idea.

But it is also a declaration of love for the works of these very different artists and even for art in general.

Generally, Van der Haak’s decorations give an extra dimension to the works of the other artists.

It stresses their peculiarity, or even their mystery, if you wish.

It is as if everything takes place within one big frame story which leads you to all kinds of different narratives and temperaments, all glowing with their own characteristics.

Contents of all photographs courtesy to all artists and Galerie Maurits van de Laar, Den Haag. 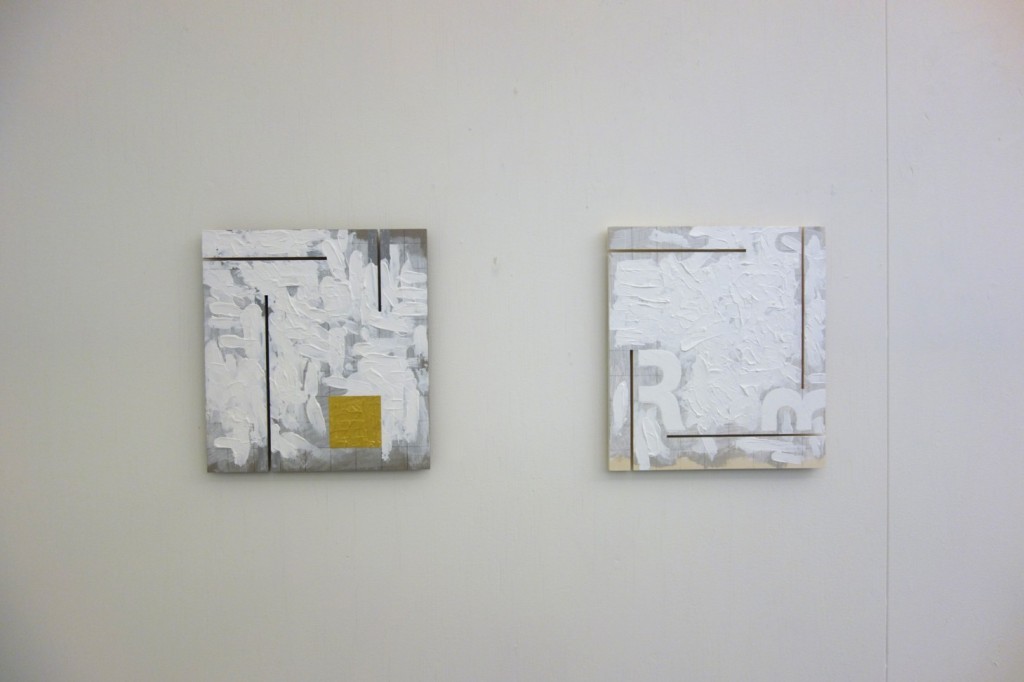 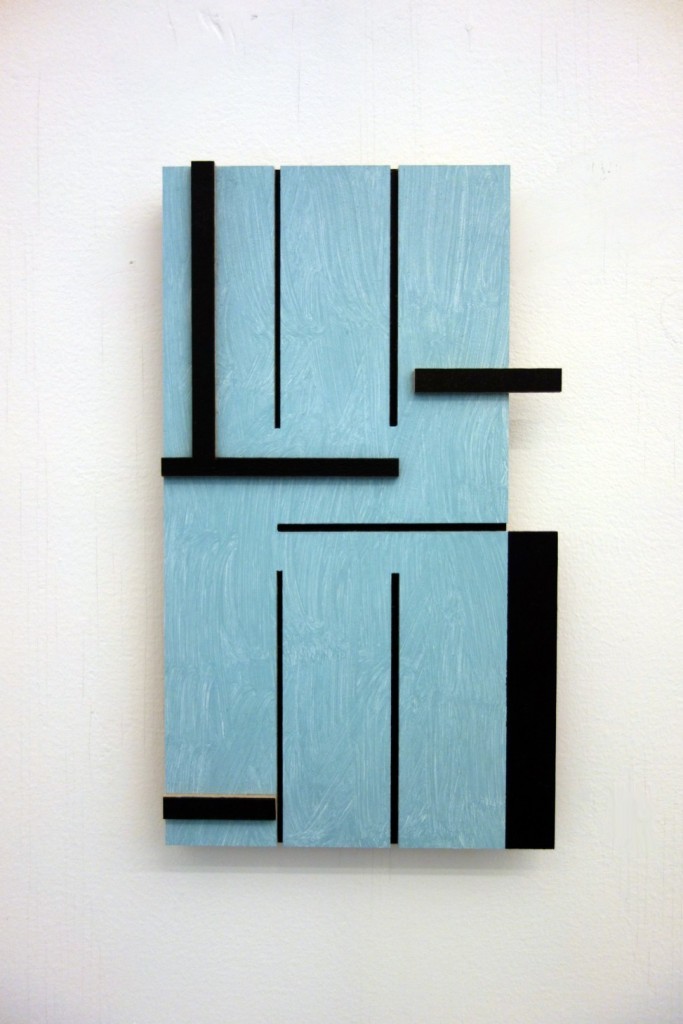 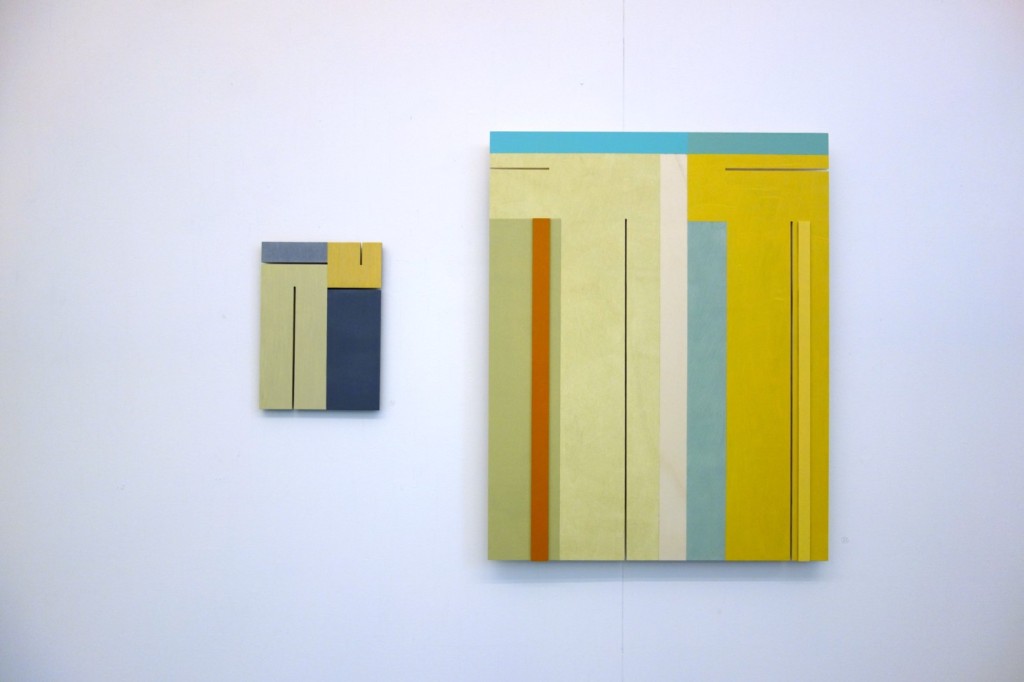 Presently, at Bos fine art, he also exhibits works without these features. 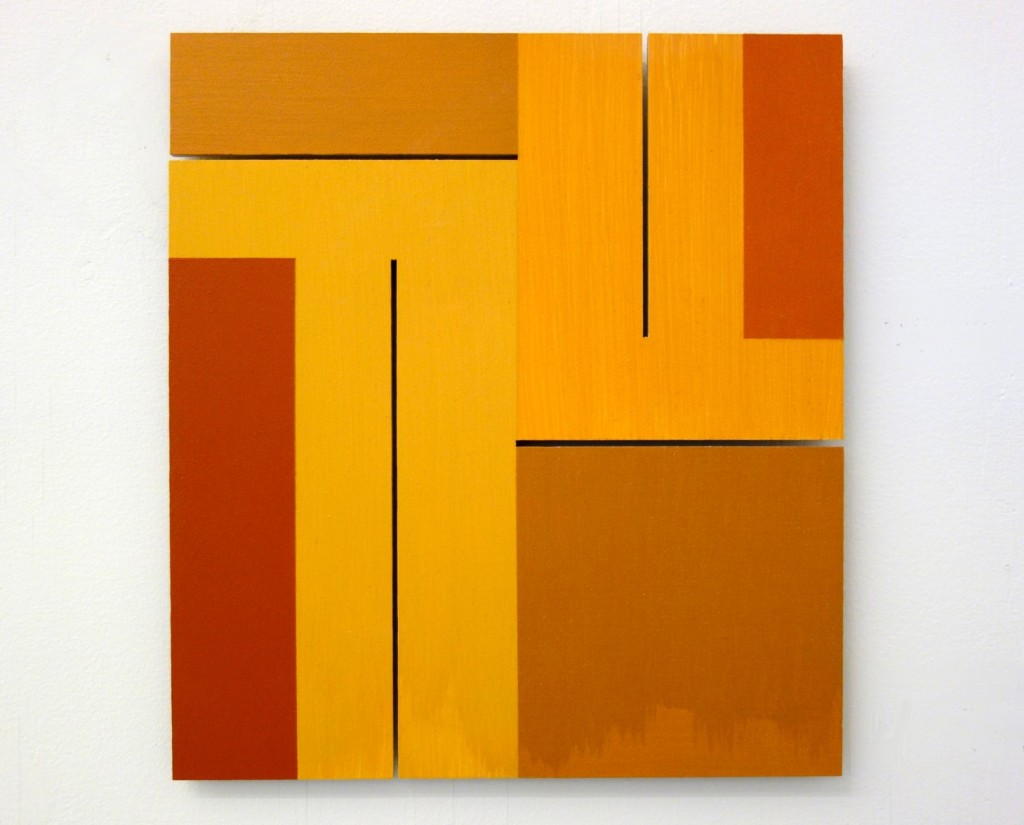 These compositions have incisions and most of them have muted colours. 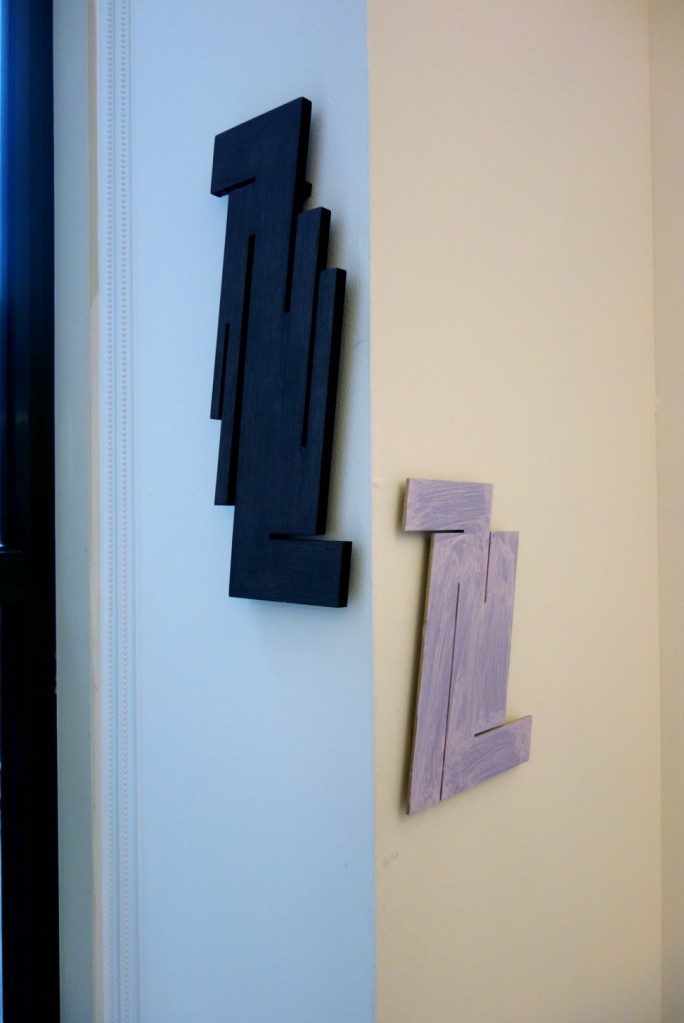 Every composition seems to have started with an idea of harmonic perfection, knowing that perfection can only exist with imperfections.

Visible brush strokes and the structure of the wood in the panels make the works breathe.

Almost every one of the works is a gem of inner balance. 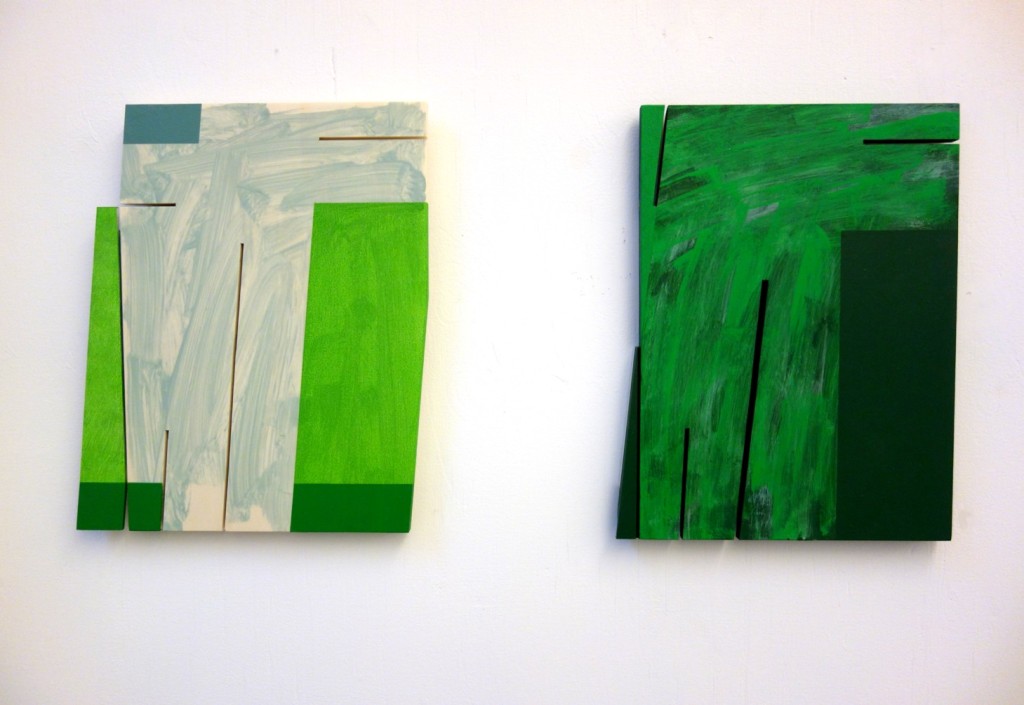 As usual Piët also made his own exhibition, making the show itself a work of harmony as much as the individual works. 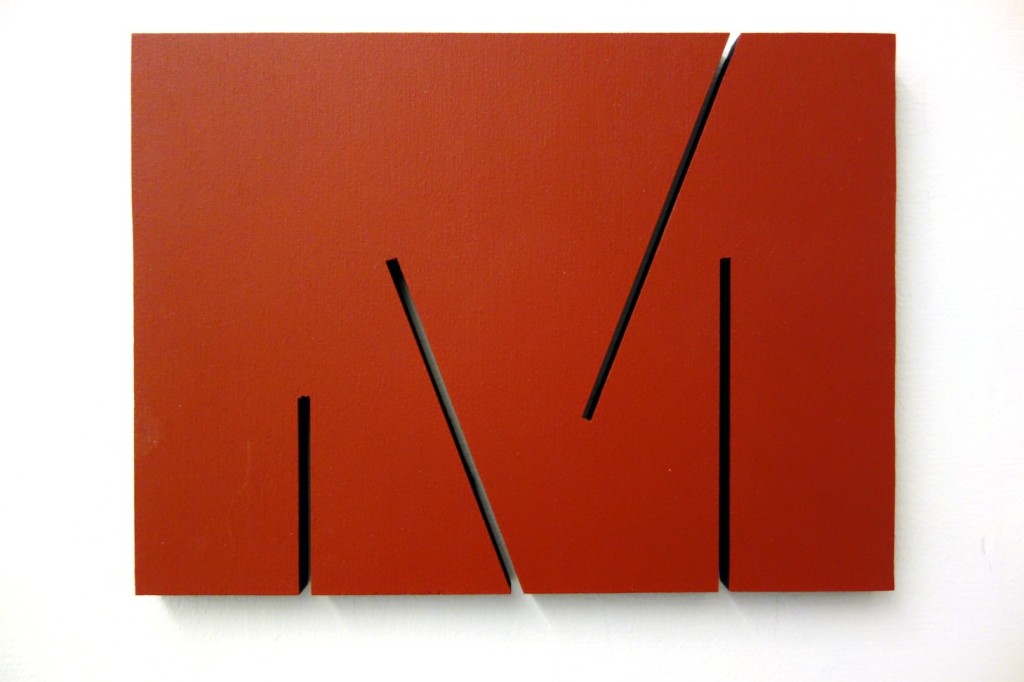 The present show at Stichting Ruimtevaart (Space Travel Foundation) is based on an artistic conversation of four artists who met each other in 1973 at the former Vrije Academie  (Free Academy) in The Hague.

By that time the Vrije Academie was the more progressive institution, compared to the then quite conservative Royal Academy (KABK) of The Hague.

However, there is no place for nostalgia in the show.

Each artist has his/her own way of working and thinking and in fact, their works have nothing to do with each other.

In spite of or maybe even due to that, it has become a very accessible exhibition.

Works on show are by Pim Piët, Nies Vooijs and Jan de Weerd.

Alas, the fourth artist, Marion van Rooij, unexpectedly died only a few days before the opening of the show.

Because of that her works could not be presented, so she is now represented by some open spaces.

Contents of all photographs courtesy to the artists and to Stichting Ruimtevaart, Den Haag.

It was already quite some time ago that Pim Piët (1954) and i agreed to meet in his studio. We often meet at exhibitions here in town.

It is quite difficult not to meet at any vernissage in The Hague as we are both always eager to know what is going on and what is on show. 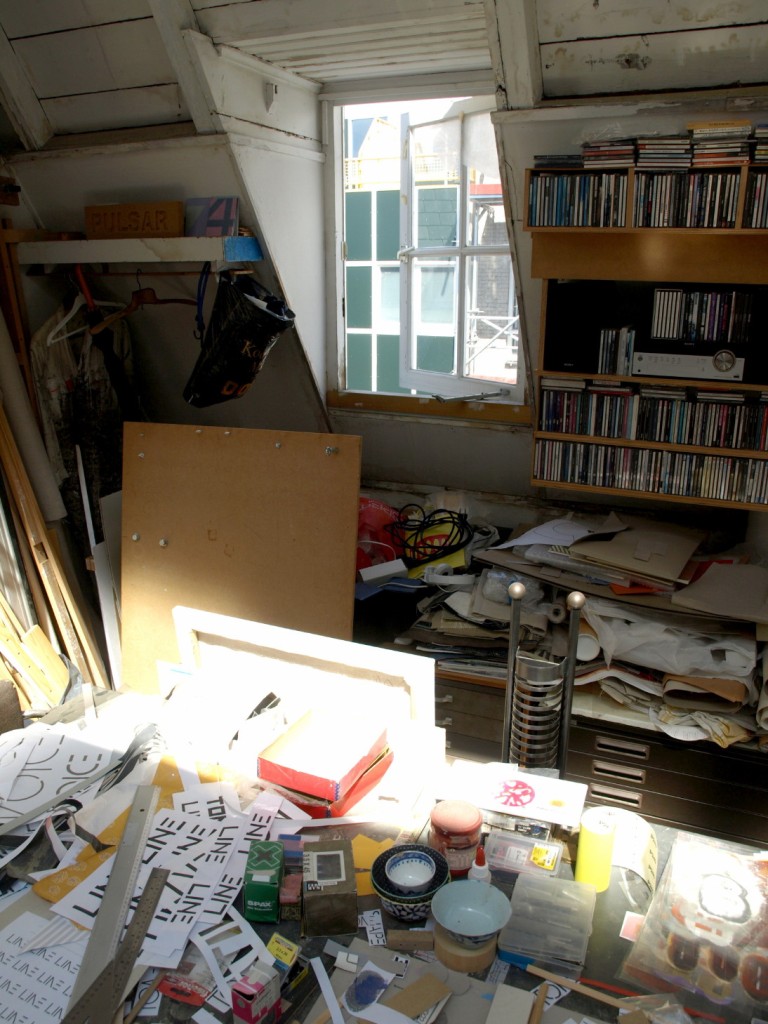 Last winter he had a presentation at De Spanjaardshof, the building where he and many others have their studios. It was a small (the space itself isn’t that big) but impressive installation with painting, panels creating alternative, more intimate space, a standing bell and sound.

It was a tranquil and reflective installation, great to see and experience during those dark winter days. 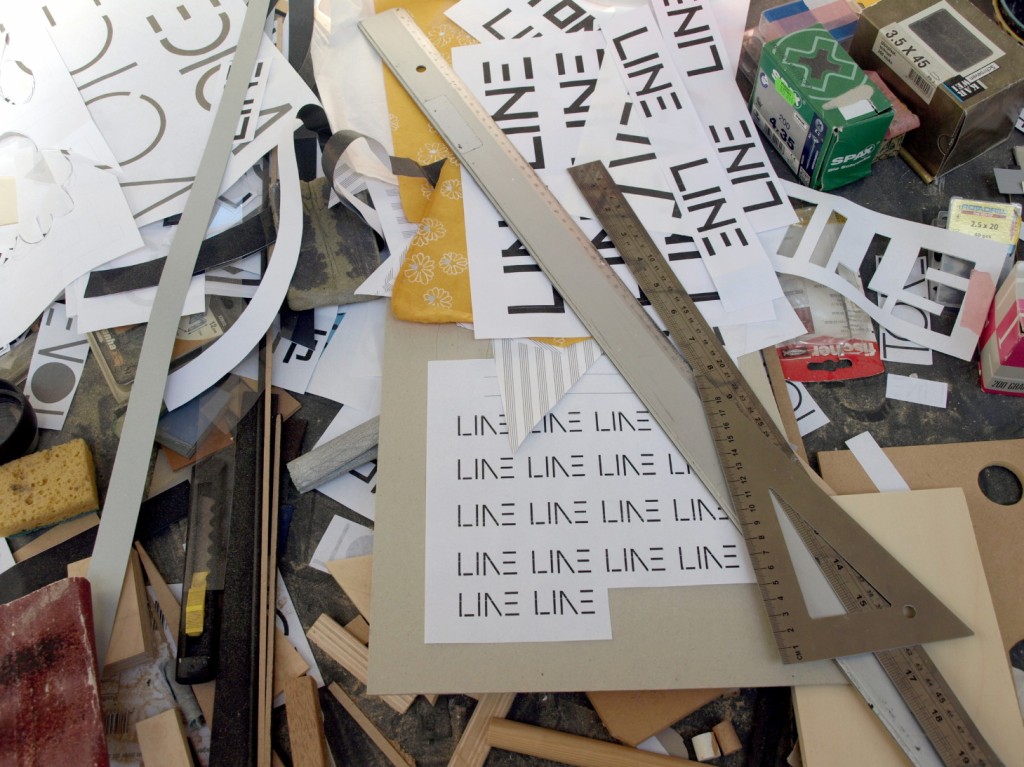 Others might have made it into a woolly, quasi-mystical scene, but that is far from what Piët aims at. For a long time he has been using words in his paintings, often just single words.

Words don’t just have a meaning, they also have a shape. The shape intermingles with the meaning and both define his paintings.

A bit like words defining a poem and its shape. 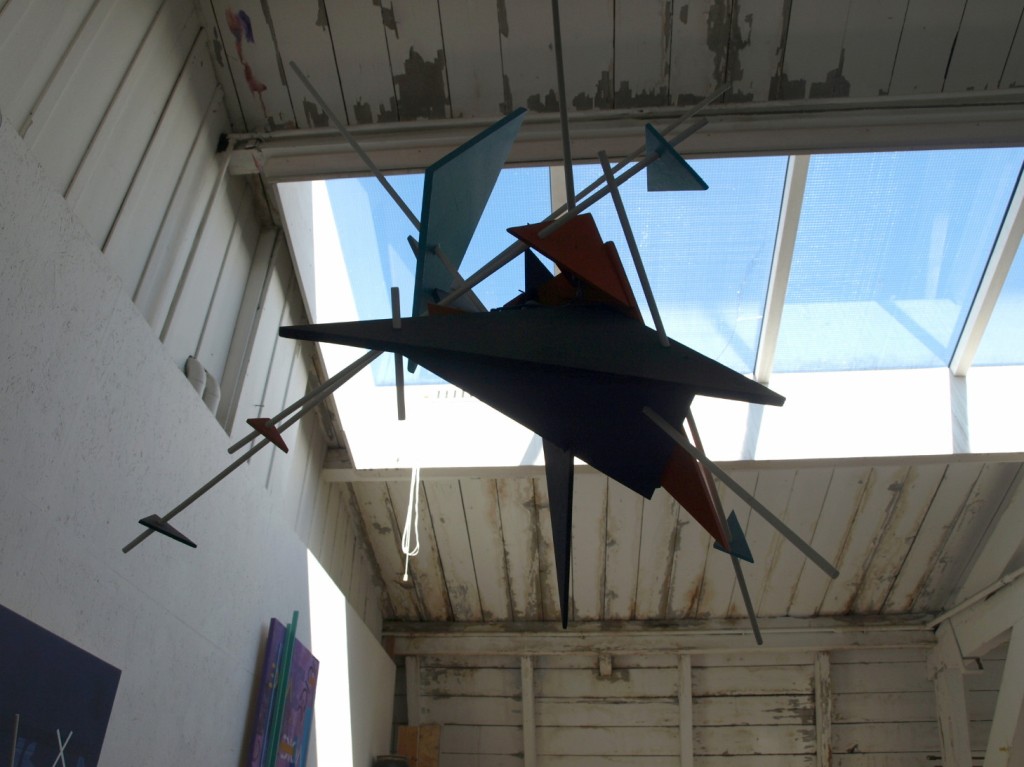 Of course colour is also a defining factor in his paintings. As for the sound, there has been a good co-operation between him and composer Anna Mikhailova(1984) for the last few years.

Piët’s word paintings, often rhythmic, have a quality that allows, even welcomes music and sound, not just for a background but as an equal partner.

As such his co-operation with Mikhailova has proven to be a very fruitful one. Mikhailova in turn has a very good feeling for what Piët wants in his pictures.

Maybe surprisingly, when we saw each other in his studio we hardly talked about his individual works.

We did talk about the marvellous light in the studio, about the general conditions for making art and about different tendencies in making exhibitions, but i guess his works, covering the walls and part of the floor, quite spoke for themselves. Piët’s work is, as it is for almost all artists, a labour of love.

Labour was one of the aspects of life we discussed.

As for many artists Piët has earned a living with other, non-artistic labour. He purposely didn’t choose for a more ambitious or intellectual job, he needs his intellectual capacities for his art work. On the other hand even the most unintellectual jobs need a sense of purpose and dedication if they are really useful. 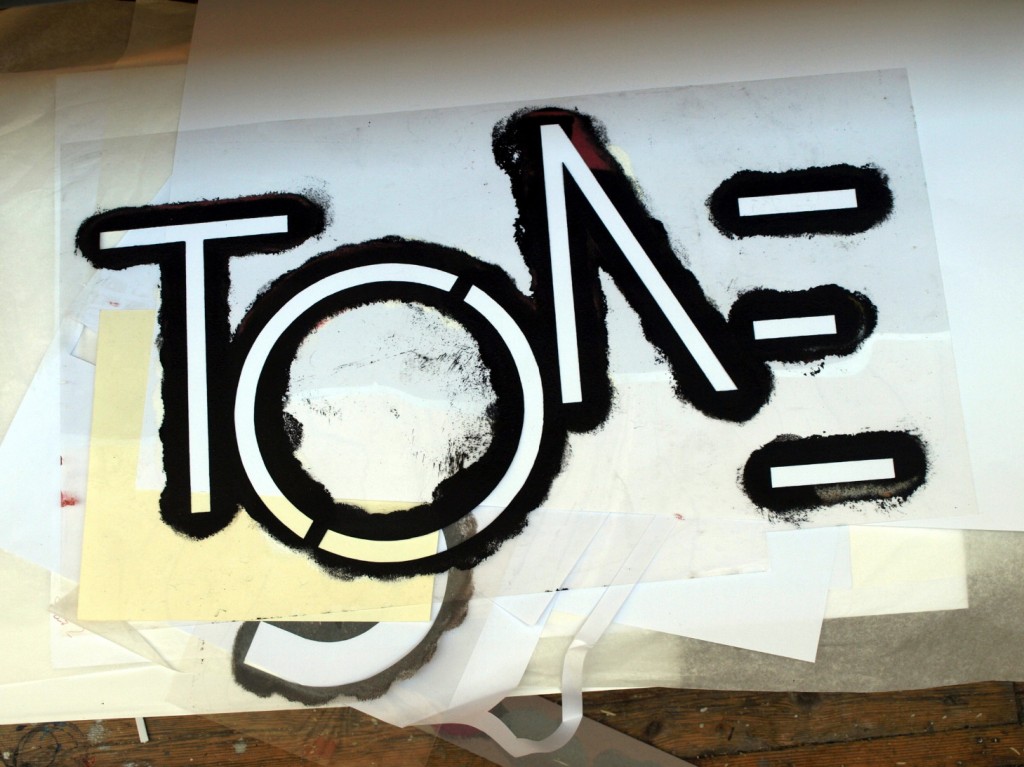 We agreed however that even this sense of purpose and dedication is denied to workers these days as efficiency is aiming at higher profits to generate more money for shareholders instead of aiming at a better and meaningful life for workers and a better service to the public.

One can even see it in the way young artists have to work in this country.

We were discussing this with Piët’s wonderful works around us and his materials and books as witnesses of what purpose and dedication can really bring in life.

For those who fear we ended on a bit of a pessimistic note: we didn’t. I think for both of us seeing and making art is too fascinating to become pessimistic about.

As to me it was a very inspiring afternoon. Thank you Pim!