When he started teaching by the end of the 1970s, there was a kind of split between traditional craftsmanship and (traditionilised) conceptualism at the Academy, and there was little room for individual artistic development.

Both sides took themselves extremely seriously and Giezen, as a newcomer, didn’t seem to fit in very well.

He appealed to the inventiveness and imagination of his students, which was quite unusual at the time (and which is still, or again, a sensitive point at the Royal Academy and in education in general).

He didn’t care very much for technique or aesthetics, contrary to what we had learned so diligently.

“Make a chair!” he told us, for our first assignment.

Students who were all thumbs, like me, were initially shocked, but soon it became clear that it was nowhere necessary at all to construct a piece of furniture.

His ways of seeing and working didn’t influence me immediately, but later on they did so undeniably.

As a teacher he was easy going, accessible, good humoured and never imposing himself as the master who knows all.

Giezen was very inquisitive about the playful en inventive aspects of humanity, again, not interested in technique or aesthetics, and extremely uninterested in financial and eternity values.

It is this warm-heartedness that shimmers through the present show of his work at GEM.

As a former student i just hope present viewers will feel the same pleasure i had looking at his works.

His pictures, documentation and objects are accompanied by works by artists of the present generation: Semâ Bekirović (1977), Paul Geelen (1983), Bram De Jonghe (1985) and Chaim van Luit (1985).

An excellent choice as there is a good dialogue between these and Giezen’s works.

It also goes to show that Giezen’s works are still very much of our time.

Content of all photograph courtesy to all artists, the estate of Krijn Giezen, the owners of the works and GEM, Den Haag

VILLA NEXT DOOR IS NOT RESPOSIBLE FOR ANY ADVERTISING ON THIS PAGE!

Otterness, who started his career with amongst others the questionable video Dog Shot Film in 1977, made this far more endearing small sculpture (2004) as part of a number of fairy tale figures along the coast next to the museum. 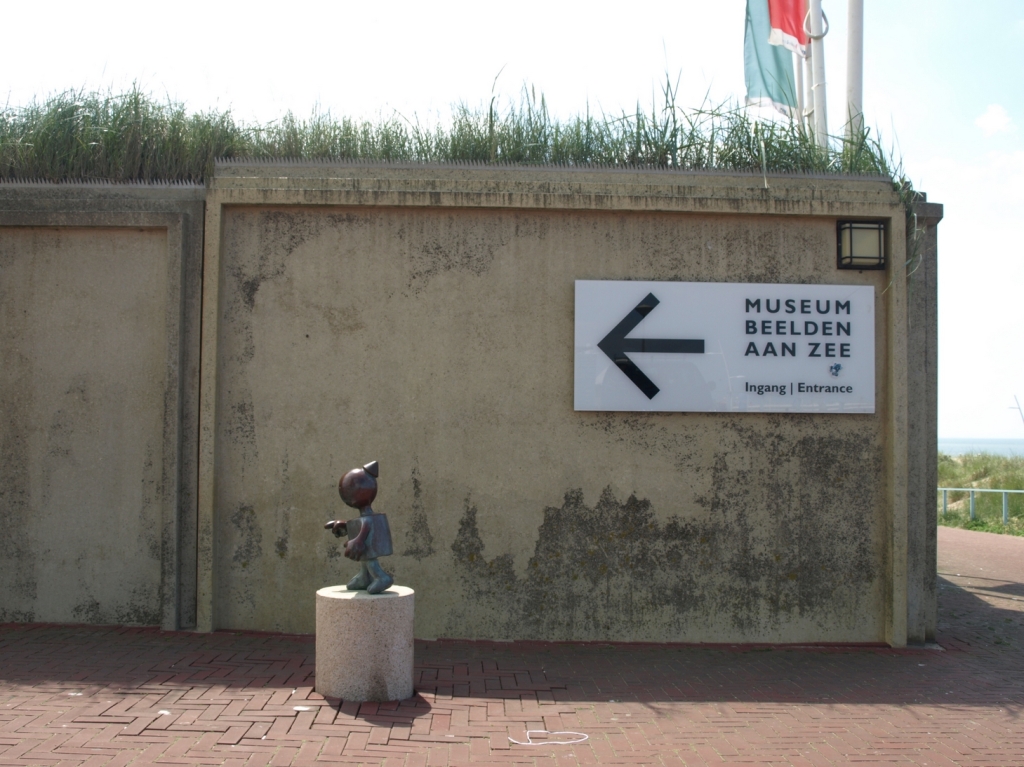 The small sculpture used to stand in front of the museum’s entrance, but was recently removed to stand more near his fellow sculptures, pointing towards the museum (as can be seen in the last pictures). 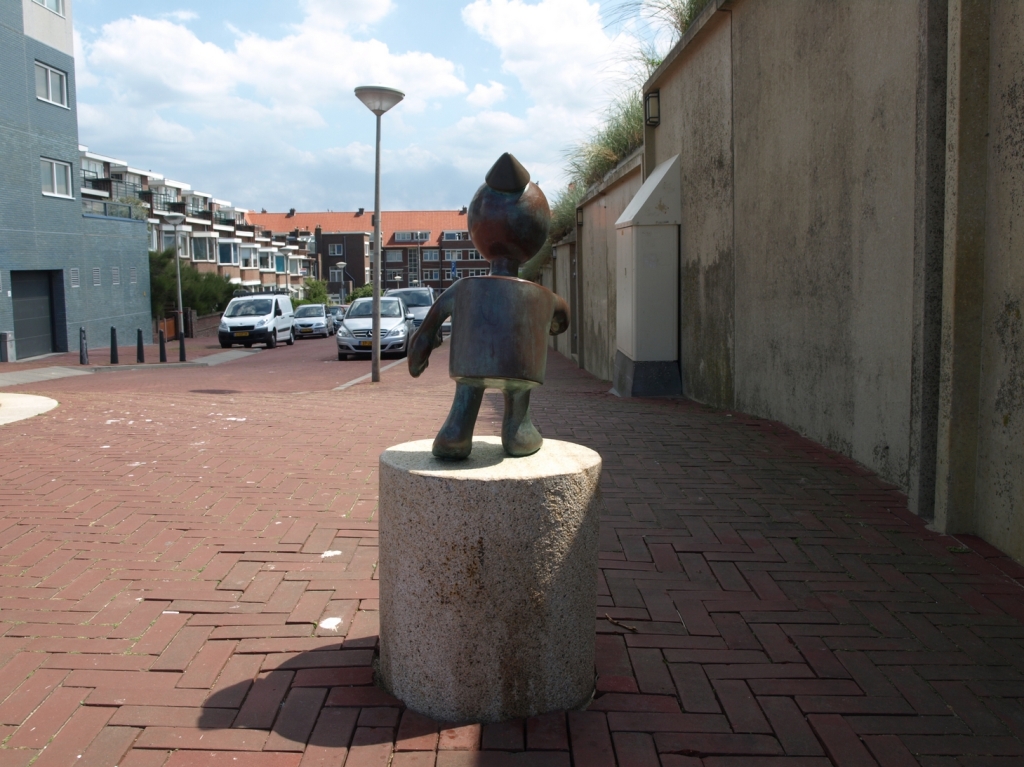 There is only one big purpose in nature: staying alive at all cost, even if the time span of life itself may vary from just a few hours to more than a millennium.

The main methods nature uses seem to be coincidence and chance. Everything around us happens to be as it is.

Mind you, if evolution had – again, by chance – taken another route, forced by circumstances, we might have looked and felt quite differently (or we might not have existed at all).

In fact nature’s toolbox gives almost infinite possibilities and variations of how we, living beings, look like and what attracts and repels us to make us mentally function in life. 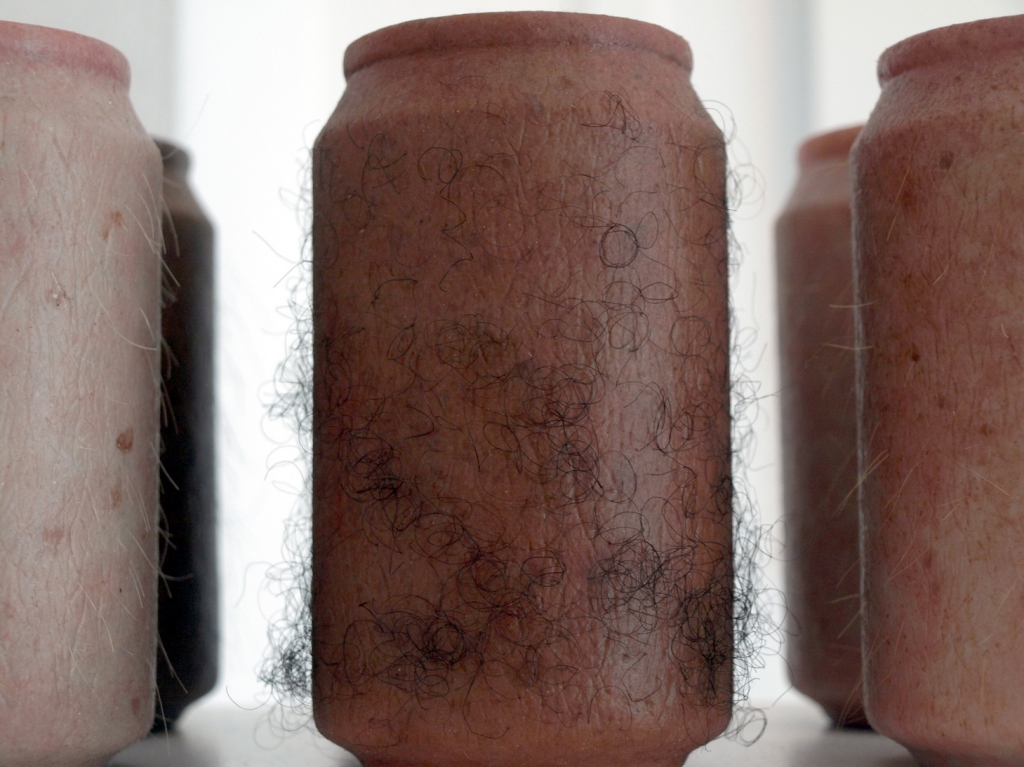 As human beings we can even play a bit with that toolbox and with artificial materials. Peter Zwaan (1968) makes works that give you an idea of evolution-gone-wrong. 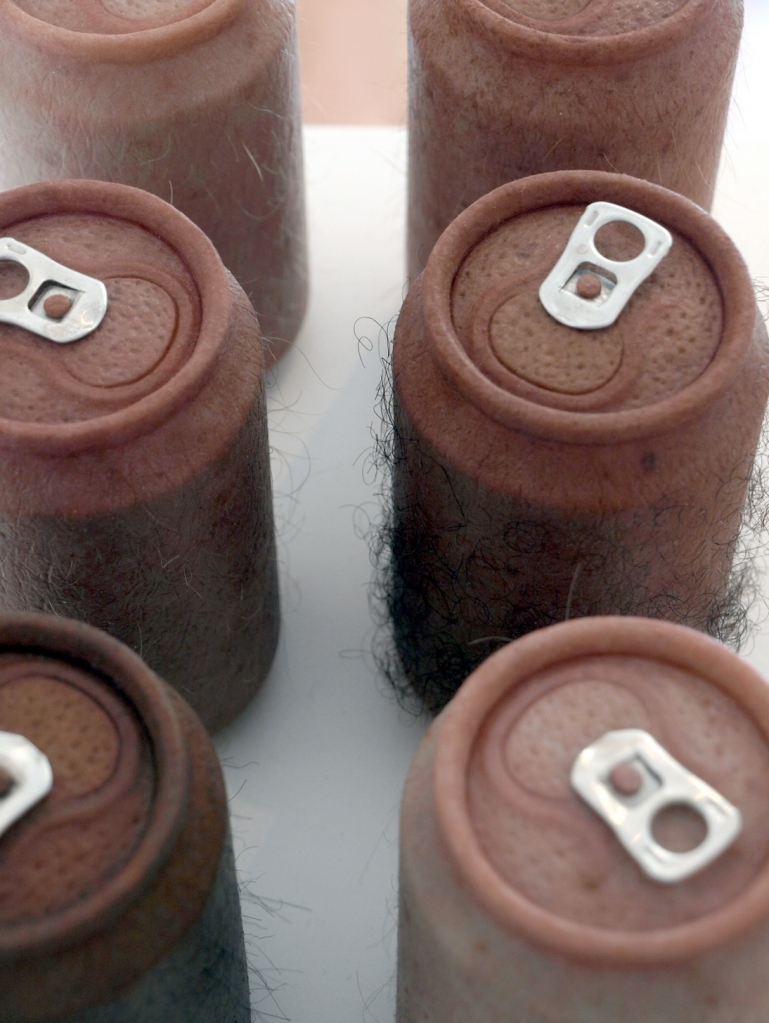 Paper becoming skin, beer cans growing skin with birthmarks and hair or the idea of fish fingers taken quite literally, Zwaan makes it all and shows it in a retrospective at HOK Gallery.

Especially on a hot summer day in the tiny gallery – of barely 120 square feet –,  you may doubt if you smell your own sweat or that of Zwaan’s works.

Zwaan takes the fun quite seriously which makes his works both attractive and repulsive.

After seeing Zwaan’s work, drinking from a beer can won’t be the same experience anymore. 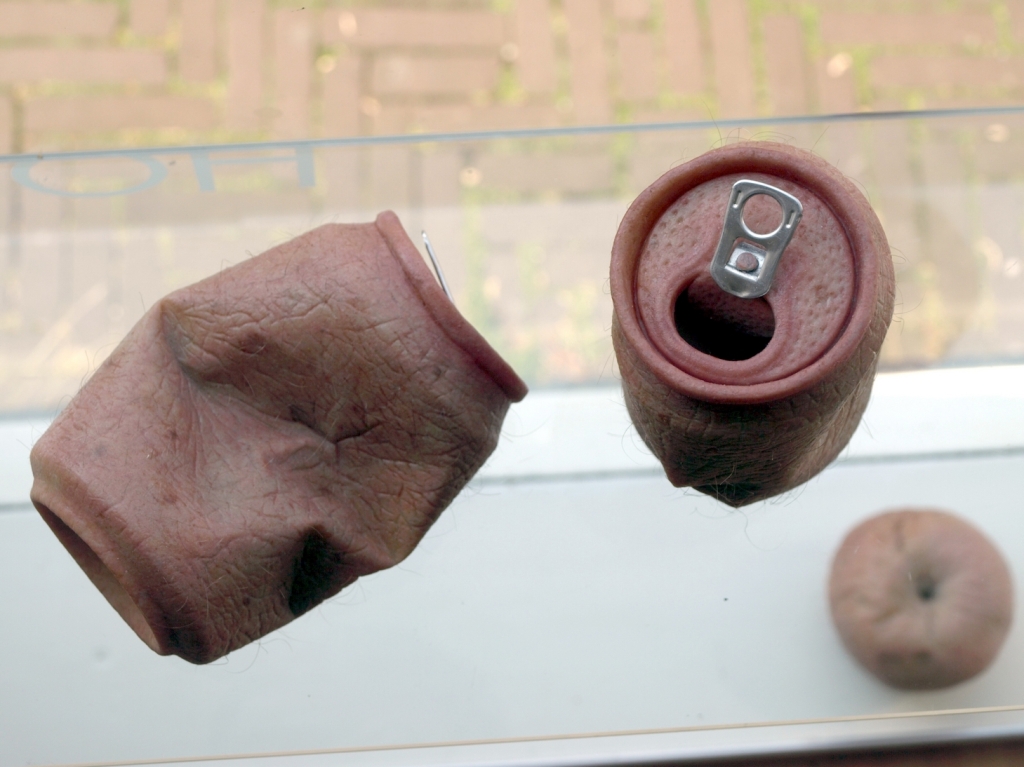 The show also proves that a retrospective doesn’t necessarily need a lot of space and hundreds of works.

Also in that respect HOK gallery and Zwaan have succeeded in making a good and imaginative show.

Content of all photograph courtesy to Peter Zwaan and HOK Gallery, Den Haag

VILLA NEXT DOOR BARES NO RESPOSIBILITY FOR ANY ADVERTISING ON THIS PAGE!

I went to see the retrospective exhibition of works by Maria Lassnig (1919-2014) at the Stedelijk Museum in Amsterdam to write a review for Villa La Repubblica. CLICK HERE TO READ THE REVIEW (in Dutch).

I leave you here with this non-representative selection of works, as i’ve written already quite extensively about the show in VLR.

Contents of all photographs courtesy to all owners of the works, the estate of Maria Lassnig and Stedelijk Museum, Amsterdam

Through the Looking Glass is the first part of the two-year disOrders project by composer Petra Strahovnik and performed by members of the Ensemble Modelo62.

Last weekend three-hour sessions were held by different instrumentalists each in one of five different locations, dealing each with one of five so-called mental disorders: ADHD, anxiety disorder, depression, bipolar disorder and autism.

Having seen them all at Trixie, the Grey Space in the Middle, Haagse Kunstkring, PARTS Project and Galerie Helder, I must admit it leaves me with the idea that all performances were more or less autistic.

Whether it was percussionist Klára van de Ketterij (ADHD) running around a collection of drums and other percussive instruments, cellist Jan Willem Troost (anxiety disorder) grappling with his instrument and his environment, or electric guitarist Santiago Lascurain (depression) in his bathtub with dirt, they all showed an extremely meticulous dedication to what they were doing within the sheer unbreakable walls of their supposed conditions, for three whole hours.

The performance by clarinettists Enric Sans Morera and Jorge López García (bipolar disorder) and the one by trumpeter Justin Christensen (autism) were even quite similar in ideas of expression: experiments with water and plastic in combination with the unexpected properties of their instruments.

In the case of the depression performance, the expression was almost too literal, with the performer covering himself in black mud, and even while the guitar was only playing a slowly transforming sound by itself, one could call it a melodramatic performance.

In the anxiety act the public was invited to use a triangle now and then, but what influence that had on the performance was hard to see.

A confronting perspective is, of course, the fact that sufferers of these so-called disorders have to cope with it every day and night in all circumstances and not just for three hours.

In the mean time one must be completely un-self-reflective or even narcissistic (!!) not to realise that we all have bits of these disorders in ourselves, in spite of the fact that most of us are thought to be ‘normal’.

They do not just confuse our brains, but may also make us cope with confusing or disturbing situations or stimulate dedication and creativity.

The fact that autism can be most associated with all five acts, is maybe because art itself needs complete dedication both to the whole and to the detail and complete surrender to the performance, whether one is making music or a painting or whatever.

As for the five acts, as said they each lasted three hours which is quite a superhuman effort by the performers.

They performed for three hours for four days, and must have practiced and prepared for many hours.

That in itself and the co-operation between the composer, the performers, the five art platforms and everybody technically and psychologically involved is a great job.

In spite of that it should be said that none of the performances were artistically interesting enough to follow for three hours (or maybe that depends on one’s own disorder?).

Also the question asked by the composer “Can we find compassion in order to expand our concept as a society of what is ‘in order’?” may be a relevant question generally, but do these acts stimulate any answers or reflections on the subject?

And if they do, are they doing so implicitly or too explicitly?

Either the question may be too wide-ranging, or the performances need more (yes even more!) aesthetic reflection.

Contents of all photographs courtesy to all performers and art spaces. 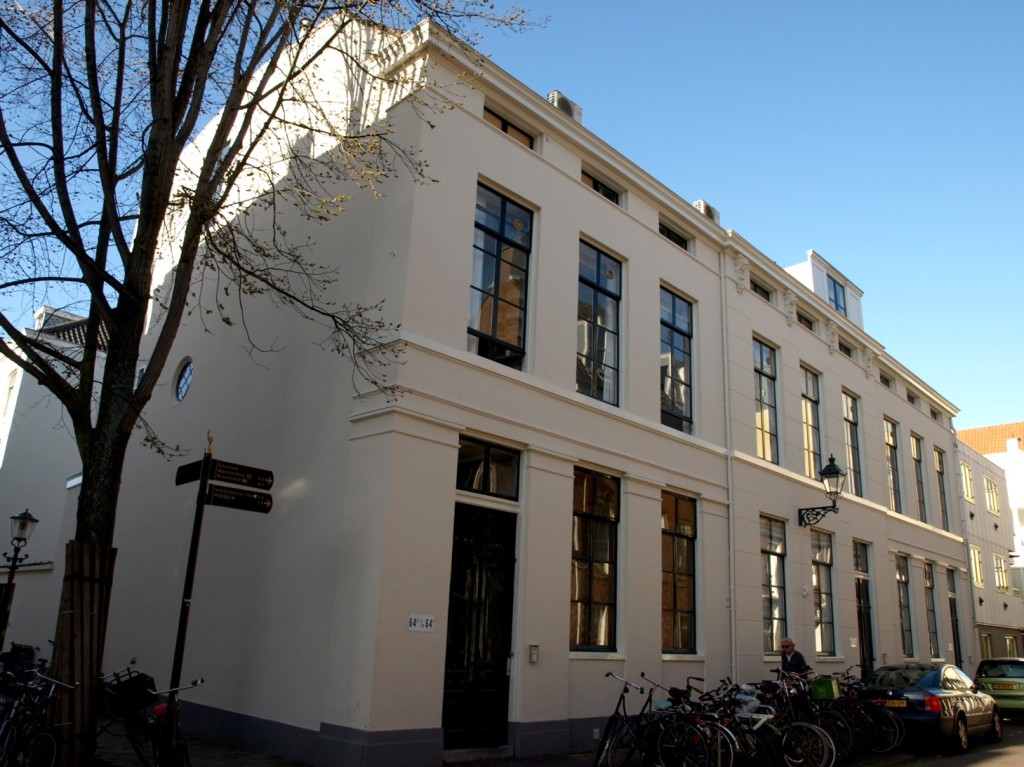 J.P.C. Swijser, who originally started out as a carpenter and a contractor, was a very active architect in The Hague, designing many apartment blocks, villas and schools and also co-designing the royal stables.

Many features of the façade of the block are original, including the doors.

The block is a municipal monument.

I visited Museum Beelden aan Zee to write a review for Villa La Repubblica about the present exhibition with works by Carel Visser (1928-2015). Click here to read the review (in Dutch)

It’s a serious  lack of education if you’ve never heard of Carel Visser.

In that case make sure to take the shortest way to Beelden aan Zee to see this show soon!

I leave you here with some pictures as i’ve written quite extensively in VLR about the show.

Contents of all photographs courtesy to the owners of the works and Museum Beelden aan Zee, Den Haag